A hidden waterway in Oslo 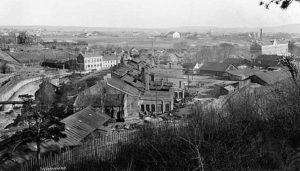 “Norway is a kingdom of mountains and deeply carved fjords. At the head of Oslo Fjord is the county’s capital city. Unlike London or Paris, Oslo does not have a large river flowing through it. But it has the Akerselva, (Aker River) a creek whose fast flowing current was harnessed by industries, contributing to the city’s growth over the centuries.

The above 1926 image of the Oslo Steel Works shows the Akerselva flowing past the factories on its way to the sea. Since the 1980s, most of the stream’s course has been cleaned up and lined with parks, except for the last quarter mile where it is hidden in a tunnel, as it flows beneath Oslo’s Central Station.”

Hidden Waters Blog, written by Sergey Kadinsky, has an interesting article about the river Akerselva i Oslo. Kadinsky is an analyst at the New York City Department of Parks & Recreation and an adjunct professor of history at Touro College. He is also a licensed tour guide who paid his way through college atop the double-decker Gray Line buses.

Kadinsky is a contributor to Forgotten New York, a local history website. His articles on the city’s history appeared in New York Post, New York Daily News, and Queens Chronicle, among other publications.

Read more about the river Akerselva on Hidden Waters Blog.